After carefully reading many responses to my inaugural foray into this blogosphere, it is clear that some detractors are put off by my ‘feminist’ position, and perceive it as ‘male-bashing,’ or even ‘dangerous.’ So, I will address this head-on here and attempt to illuminate the relationship between feminism and the built universe.

I hold an M.A. in art history from the Savannah College of Art and Design.  In the process of earning this degree, I read much history and discourse about the male dominated worlds of art, architecture, and design. We call it the ‘man-made’ world for a reason, as opposed to the ‘human-made’ world. To the layperson, feminist studies are associated with ball-busting, bra-burning ‘femi –Nazis’ of the ‘60s and ‘70s, out to teach white men a lesson. I want to make it very clear that arguing a feminist point of view has more to do with discovering HOW women have been positioned in secondary places, and less to do with making ad hominem attacks on men who placed us here. Most feminist material culture and design history arguments are nuanced to the point where they can easily be misunderstood.

Where Angels Fear to Tread

In today’s academic environments, feminism is divided into categories of radical feminism, cultural feminism, second wave feminism, post-feminism, and more. Their commonality lies in the discourse about how women are treated differently, and in most cases unequally, from men. Some scholars today argue that the Postmodern theories being employed today practically ignore feminism entirely, and act as though the battle has been won.[1] Has ‘the woman question,’ or what Betty Freidan called ‘the problem that has no name,’ been sufficiently addressed?[2] I argue that no answer is sufficient until women are serving in an equal number of leadership positions with equal pay. In fact, it is symptomatic of the current Postmodern condition that we must suggest reviving a feminist dialog.

I may be digging where angels fear to tread, but I believe that a reasonable look at history and at current economic data are critical to the advancement of women in our industry. One of my followers—a male industry leader—said that he was recently criticized by a male colleague for his support of more female leadership in the industry, and was asked, “Since when did you become a feminist? Have you turned gay?” This, I am afraid, is a pervasive attitude we are confronting, although most of the time it comes out in the boys’ rooms, away from the earshot of women.

Woman’s Place is in the Home and Material Feminism

Throughout history, women have been subjected to a world constructed by men. In the nineteenth century, the consumerism generated by the Industrial Revolution brought about significant changes for the roles of women in domestic environments. One branch of feminism, called ‘material feminism,’ has been largely left out of the contemporary discourse of gender and design. It is helpful to re-consider this early movement, which began in 1868 and fizzled in 1931. The movement’s greatest progenitor was Charlotte Perkins Gilman who wrote the seminal Women and Economics: The Economic Factor Between Men and Women as a Factor in Social Evolution in 1898.[3] This work was rediscovered in the 1960s and demonstrates how long women have been working harder for less pay than men, and are still burdened with the majority of the work at home. Gilman pointed out that the human race is the only one in which the female must depend on the male. We must also take on lesser roles for less pay; it is a culture wherein the male assumes bourgeois status, and the female that of the proletariat. 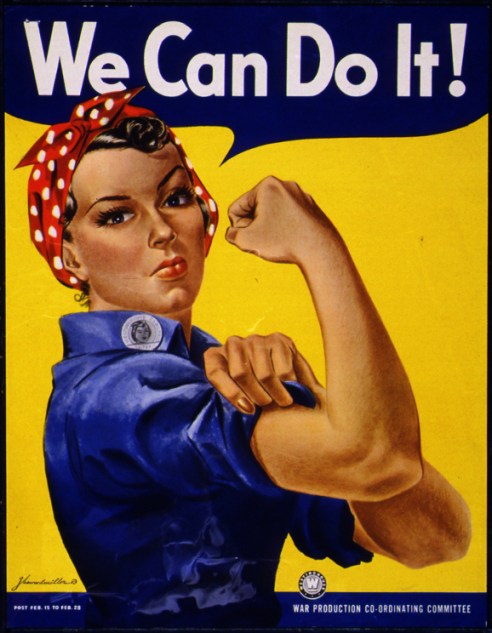 Early material feminism was mildly embraced by such socialists as Karl Marx and Max Engels who understood what Engels called “the domestic enslavement of women,” but they never truly found a place for women in their utopian workplaces.[4] Gilman and her colleagues opposed the view that women’s equality lies in doing “man’s” work, and called for women being in control of women’s work, notably all the work involved in running a home and reproducing in society. They called for the socialization of housework and childcare, and sought remuneration for this labor. Arguing that women should be the socializing forces for society, material feminists aligned with architects, urban planners, and designers to design and build housing and communities that would best suit domestic labor, foster community living, and decrease the burdens on women who were entering the industrial male workplace in unprecedented numbers at the turn of the twentieth century.[5]

Sexism in the City

At the dawn of the twentieth century, apartment buildings and community housing developments were planned with communal laundry facilities and kitchens. Community bakeries and hot food kitchens were springing up in urban areas, and daycare facilities were on the rise. Women were becoming more involved than ever in not only the decoration of the home, but more importantly, in the design of new construction relative to running a family in addition to earning a wage.

More and more women insisted on living in cities to take advantage of tighter, cooperative environments—those in which the women would ultimately socialize and nurture the culture. Fredrick Law Olmsted, the acclaimed urban planner and landscape architect, saw this evolution of the capitalist city as a liberating force for the household. He envisioned public kitchens, spaces, and social integration as the salvation of industrialized culture.[6] Naturally, the movement faced resistance from many dominant white males who claimed that women’s economic independence fostered “unnatural motherhood” and “futurist baby-raising.”[7]

The material feminists helped design the earliest apartment complexes in east coast cities for middle and upper class residents and tenements for the poor. They were surrounded by cooperative services and amenities to accommodate working families. These women argued that women, not men, should control the development of urban infrastructure including telegraph lines, water pipes, and fuel lines, since they are the ones concerned with reproducing society. All of this development came to a screeching halt, however, in 1931 with the Hoover Commission Report on Home Building and Home Ownership, which advocated single-family home ownership. This led to the development of 50 million single-family suburban homes, squarely defeating the material feminist preference for community development in cities.[8] 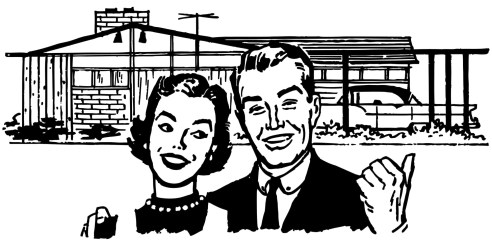 Fast-forward a couple of decades when suburban living was facilitated. Between the 1930s and 1970s, capital was consolidated via corporate mergers, and America saw a division of labor between those who worked in newly formed corporate headquarters, most often positioned well outside the industrial cities.[9] This isolation made it even more difficult for women to have jobs and run the household and raise children; the community support network was no longer available.

In this scenario, white male managers were offered single-family homes and the non-working wife became a symbol of a man’s success. This was two steps forward, three steps back for working women, sending us back to the early days of the nineteenth century when the only work they were allowed to do was decorating the home—still without pay. In this era, however, not all progress was lost. Women made significant contributions to the success of products through consumerism. There is much to be said on the history of women in the home, and this will be addressed in depth in my book.

Early nineteenth-century women were not allowed to work; it was considered vulgar. This, however, did not stop them from finding ways around such social restrictions. They started charities—an acceptable activity—and in so doing, used these fundraising platforms to show off their crafts, quilts, and other artistic items. This is how women became artists. No art clubs would allow women in and so they had to find ways in which to express themselves. The non-profit world provided a safe environment in which women could design and create products. This activity is rich with stories—some controversial and others, downright cunning—and I will share many in the book. 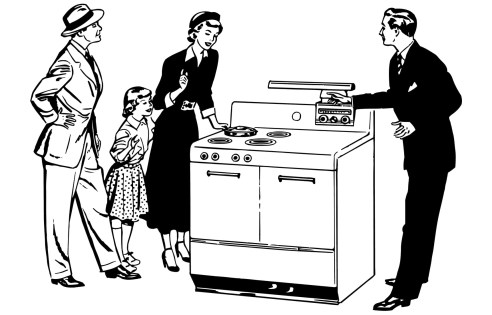 By the 1950s, however, the advent of the non-working suburban ‘decorator housewife’ put women in a position to turn their homes not only into comfortable surroundings for their families, but also into showplaces for their husbands’ colleagues, ultimately enhancing their corporate images. The era of ‘conspicuous consumption’ was born and shopping was considered to be ‘women’s work.’ This was nothing new. Remember that Marshall Field coined the term ‘give the lady what she wants’ in the 1860s, because, even then, women were the economic drivers.

The 1950s was a period of re-positioning women in the home after being in the workplace during the war. Many women even worked in furniture factories, some of which were used to produce glider wings, and other equipment for the war. The re-positioning effort was aided by a flood of new shelter magazines glamorizing housework and newly designed domestic appliances to make work at home more convenient and aesthetically pleasing. The notion of ‘good taste’ was promoted to encourage a particular kind of shopping for the home.[10]

Housewives were expected to decorate their homes themselves, and the use of professional decorators was frowned upon in middle-class suburbia. This onus spurred these women to work tirelessly on their homes. Many feminists have criticized this class of woman claiming that they capitulated to their subordinate roles, however, I argue that these women did more to influence design through their processes of selection, and, ultimately, what they purchased for the home. As the primary consumer and decision-maker for the home environment, these women had the ultimate influence over what male-designed products made the cut, and which ones failed. Now we are back, full circle to my ultimate argument: wouldn’t more female involvement in the process of product development be a good thing for the home furnishings industry?

The 2009 Harvard Business School Study, The Female Economy, which shows that 94% of decisions for home furnishings purchases are made by women, is further testimony to the fact that the home environment and its functions continue to be the purview of women.[11] The feminist dialog in design, art, and architecture, has been so subverted into the Postmodern ‘non-gendered’ voice, that we fail to recognize that women are still not in enough leadership roles, and we are still paid, on the average, 20% less than men for doing the same jobs. Joanna Barsh, the renowned market analyst for McKinsey, has cited the lack of women leaders in many businesses and has argued that women necessarily improve the corporate landscape. She stated in the article Can Women Fix Capitalism, “Women also improve the ecosystem, because company leaders better match the profiles of customers and employees.”[12]

Try not to think of feminism as a negative, male-bashing term. It is one that should rightfully point to us to the historical dialog of how women necessarily contribute to the built world, and how we should not lose sight of the fact that, whereas we have come a long way, we have done so within the confines of the ‘man made’ universe. Perhaps it is time that male leaders of industries catering to the civilized world and societal structures should look back to the material feminist movement and its male champions such as Frederick Law Olmsted in order that the future may become a ‘human made’ world for future generations. To paraphrase Charlotte Perkins Gilman, shouldn’t women have more control over the environments that are traditionally their purview, including the design and manufacture of home furnishings?

[3] Gilman, Charlotte Perkins, Women and Economics: The Economic Factor Between Men and Women as a Factor in Social Evolution.

[5] For more on women entering the industrial workplace, see Alice Kessler-Harris, Out to Work: A History of Wage-Earning Women in the United States (Oxford: Oxford University Press, 1982.

2 Responses to “The ‘F’ Word in Home Furnishings: Feminism and the Man-made World”